In a country where hospitality dates back to Xenios Zeus, hospitality is sacred. Historic monuments tell the life of the place over the years, while deleting its new course. Byzantine monuments, archaeological sites, monasteries, churches, traditional settlements are just some of what you can visit in the area.

Plataria is an ideal starting point for fascinating getaways and visits to the historical and natural monuments of Epirus and sites of tourist interest, such as: the archaeological monuments of Necromanion, Nikopolis, Dodoni, Parga, Acherontas, Souli, the islands Paxos, Corfu and other nearby or long-distance escapes such as Metsovo, Zagorohoria and Tzoumerka.

All Saints residences - Agioi Pantes is the best base for summer getaways in Epirus combining summer holidays with educational getaways in nearby archaeological sites and sights of Epirus. 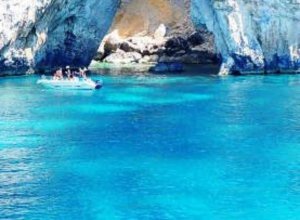 By sailing, boat or boat, anyone who bows to the emerald lunar islands of the Ionian Sea, Paxos and Antipaxos, sets a bow for paradise. Exotic beaches: green and turquoise waters, white sand and fine pebbles.

Nature "harsh": centuries-old olive groves, dense vineyards and vegetation reaching up to the water. Unique experiences: sunset on the whitewashed rock of the Hermit, exploring caves and walking to discover the old cisterns. 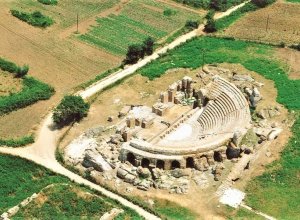 Just a few kilometers away from Preveza, on the Preveza - Ioannina highway, stands the "City of Victory", Ancient Nikopolis. Nikopolis was built on the orders of the emperor Augustus Octavian (or Octavius), the first Emperor of Rome, to honor the gods, especially Aktios Apollo or other reports by Poseidon and Mars, for his victory against Markos Antonius and Cleopatra in the Great Battle of Aktion in 31 BC. 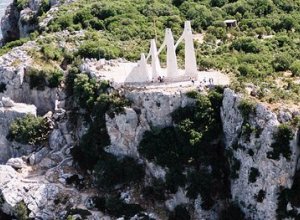 The legendary dance of Zalogo by the Souliotians who fell from the rocks in order not to fall into the hands of Ali Pasha has passed into History. The monument was built in 1950-1961 and is the largest statue of Greece, titled Zalogo Monument, designed by sculptor Georgios Zongolopoulos (1903-2004). The visit to the Acheron River, 10 km from All Saints Villas, a place of unparalleled natural beauty and a protected Natura 2000 site, is considered essential for every visitor to Thesprotia.

The crossing of the gorge through the coolness of the frozen, crystal clear waters of the river, beneath the shadow of super powered plane trees, to the springs of the river or the Scale of Tzavelena, is a unique experience of nature. The region has a strong historical and mythological interest, but also offers activities such as rafting, kayaking, horseback riding, etc. 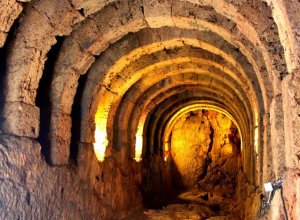 The most famous necromancy of the ancient Greek world is located near the northwest shores of Lake Acherousia, at the point where the rivers of Hades, Acherontas and Kokyto are joined.

In the ancient sources, the location of Lake Acherousia is described as the point of descent of the dead in Hades, and Efira, the city of Epirus located a little further north, is associated with an ancient worship of the Deity of Death, creates fear and wakes. 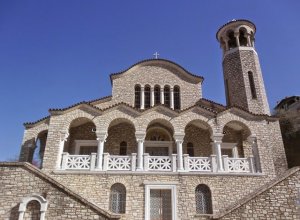 Agios Donatos is the Patron of the City of Paramythia. He lived during the reign of Emperor Mega Theodosius and was a bishop of the city of Epirus which was one of the twelve cities of Epirus and was built in the place where the village of Hóika is today.

He was born around 310 and died 387. He built a temple in royal money, which he decorated majestically. At the southern edge of the Prefecture of Thesprotia, at the borders with Preveza and very close to Parga, a small terrestrial paradise, the beautiful lake with the water lilies under the protection of the NATURA program, attracts bird watchers.

The Recreation Park in Perdika 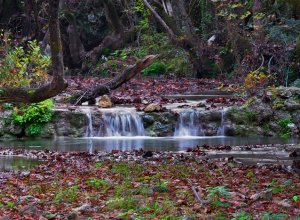 Within a short distance from the monastery of Agios Athanasios you can visit the Perdika Recreation Park. Within it you will see the magic of nature.

Waterfalls, small bridges linking the river, as well as walkways with stairs of tree trunks, for those who want to explore the rich nature on foot. 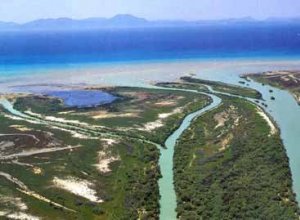 In the Kalama’s River Delta, we find a complex mosaic of vegetation consisting of 16 habitat types. Of these, 14 are included in Directive 92/43 / EEC while the Lagoon Lakes habitat is a priority for protection.

In the lagoons, thousands of fish and birds find food and shelter for this, and the type of habitat in the European Union has priority for protection.

The picturesque fishing village of Sagiada 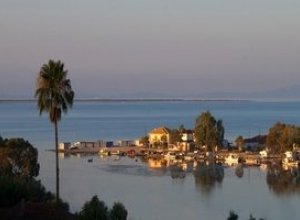 A picturesque and quiet fishing village, far from the crowds, next to the estuary of the river Kalamas, Sagiada welcomes its guests, generously offering them an alternative proposal of relaxing escape.

The Folklore Museum of Tsamada 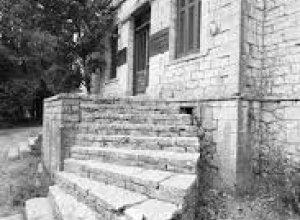 The Tsamanta Folkloric Museum was founded in 1983 in Filiates, by the icon-painter Kostas Zoulas.

It is housed in the old stone-built school of the village and the collection includes over 3000 rare exhibits, photographic documents, folk art, wooden representations and other objects, most of which are offered by the village residents.

The Holy Monastery of Giromeri For centuries the Holy Monastery of the Assumption of the Virgin Mary Giromeri stands on the edge of a steep cliff, on the slope of Mount Farmakouni, near the Greek-Albanian border, 8 km from Filiates of Thesprotia.

It is a historic monastery directly connected with life throughout the centuries, in the area. Founded by Osio Nile the Constantinopolitan monk, according to Nicholas, who originated from the imperial generation of Laskareas, at the beginning of the 14th century, at the time of the Despotate of Epirus.

The ancient city of Dodoni 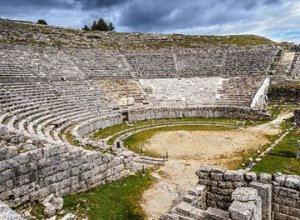 In the narrow valley east of Tomar there is the sanctuary of Dodoni, which in antiquity constituted the religious center of northwest Greece and was associated with the worship of the father of the gods, Zeus.

Dodoni was known for the famous oracle, which, according to tradition, was the oldest in the Greek territory, a fact confirmed by its references to the Homeric epics.

Lake Pamvotis in Ioannina, the cave of Ioannina and the famous museum of waxes Vrellis 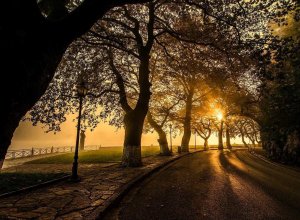 Ioannina is a city that offers you breathtaking experiences, and everything next to the ... lake. Known as the lake of Kyra-Frosini, Lake Pamvotis with its hidden secrets and traditions has gained international reputation over the years, as its shores are dense and the mountains of Epirus are reflected in its waters.

Near Bizani, in Ioannina, within half an hour from Lake Pamvotis, is the Museum of Greek History - "Pavlos Vrellis", housed in a 18th-century Urban Fruity Architecture building in Epirus. 150 natural-looking waxes embedded in a faithful representation of the environment of their time make up a unique experience of historical browsing that is thematically divided into the pre-revolutionary and revolutionary era as it includes separate tributes to important Greek personalities such as Paul Melas and her Lady Ro.

Finally, a truly special tour that will surely be unforgettable to young and old is the exploration of the Perama Cave! It is a magical world made out of a fairy tale. The historical cave of Perama counts 1.5 million years of life and is located in the interior of the Goritsa hill above the village of Perama.

Zagorohoria, Tzoumerka, the gorge of Vikos 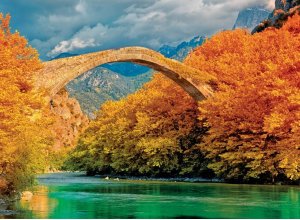 A stone's throw from Ioannina, at the foot of Pindos, there are 46 settlements - ornaments of mountain Greece, Zagorohoria! A visit to Zagorochoria will confront you with a beauty that is hard to find. You will come across villages huddled in dense forests, but with immense views of the nature of Zagori, magnificent colors throughout the year, rivers with crystal clear waters and natural dragonflies!

The Gorge of Vikos, which has won first place in the Guinness record as the deepest gorge in the world in proportion to its width (width 1,100 meters, depth 900 meters, length 11 km), is one of its most important attractions a region of great environmental importance and a special natural spell.

Tzoumerka or otherwise Athamanian Mountains, as their official name, is a cluster of 47 picturesque villages and traditional settlements, the Tzoumerko villages, the most well-known being Kalarrytes, Melissourgos, Pramanta, Agnanta, Athamania, Vourgareli and Gardiki Trikalon. Several of the Tzoumerko villages are located at an altitude of over 2000 meters, while their highest peak is Karditsa at 2.429 meters and the second highest in Kiphisia at 2.393 meters.

The wineries of Metsovo and Zitsa 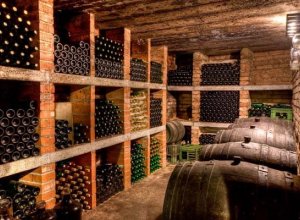 Starting in the late 1950s, Katogi Averoff remains deeply connected to the founder of Evangelos Averoff, Metsovo and the people who work for the production of wine.

The cultivation of the vine in Epirus and particularly in Zitsa is very old. Its wines were famous not only in Epirus but also beyond. The first attempts to establish a winery in the Zitsa area began in 1939. But the war and the occupation stopped the plans. Finally, in 1954, the winegrowers of the region established the first Winery with small facilities.

The cosmopolitan and world-famous island of Corfu 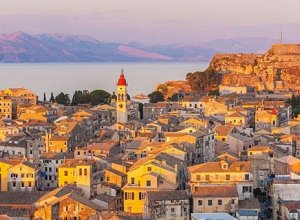 Corfu, one of the most beautiful islands in Greece, perhaps the most green with the densest vegetation but also the most dense road network, an island with great and important history, inextricably linked to the Greek culture and tradition for more than 3000 years. 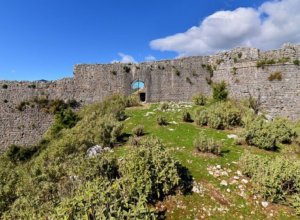 The area of ​​Thesprotia has interesting and admirable archaeological and historical monuments, such as Ancient Gitani, Ancient Faneti, Ancient Elaia, Dymokastro, the heroic and glorious Souli and Kugi Souli, which prove their rich heritage from antiquity.

In the archaeological museum of Igoumenitsa, as well as in the folk museums of Souli, Tsamanta and Finikion, you will have the opportunity to experience the historical and cultural past of the place.

Would you like to stay in a hotel in Ioannina? View the Krikonis Hotel.